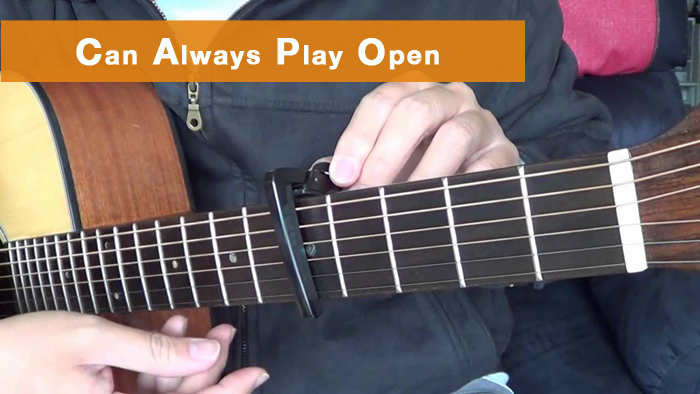 CAPO is not an acronym for “can always play open.” But, a capo can make it possible to transpose (to change the key) of music that contains open chords, without making the fingering of the chords more difficult. As you probably know, a capo is a clamp that attaches to the guitar neck and raises the pitch of the strings. Theoretically, it makes the strings shorter. The term capo comes from the Italian word capodastro, which means “head of the fretboard. The capo raises the pitch of the strings ½ step each time it is moved up one fret. Placing the capo in the first fret makes everything ½ step higher. For example, if you place the capo in the first fret and finger a G chord, you are actually playing a G# or Ab chord. Place the capo in the second fret and everything sounds a whole step higher. If the capo is placed in the second fret, when a G chord is fingered, it will sound like an A chord. Fingering a G chord with the capo in the third fret, will make the G sound like Bb. Most people who use the capo don’t actually think of the real pitch that is being heard, but rather what the chords look like. The time you would have to know the real pitch is when you are playing with another instrument.

Music can be transposed, by changing the letter names of the chords. Transposing in this manner may make the original simple chords difficult because sharps and flat chords may result and would than have to be played as barre chords. But, using the capo makes it possible to transpose the music and use the same chord fingerings as the original. The capo can make playing the chords easier, and using the original open chord fingerings may result in a full sound by playing open chords. Also, raising the pitch of the song may put it in an better vocal range. While moving the capo up raises the pitch, if a song is too high to sing, raising the pitch even higher could put the song in a better key if it is sung one octave lower. Some people may think that using a capo is cheating. There is a big difference between cheating and making a wise move.

To make playing the chords easier and still keep the key the same, the song could be transposed and then the capo could be placed in the correct fret to make the chords, when fingered with the capo sound like the key of the original. For example, if a song is in the key of Bb and the chords are Bb, Eb, Cm, and F7, the song could be transposed into the key of G, making the chords G, C, Am, and D7. Then those new chords can be played with the capo in the third fret. The new chords will now sound like the chords in the key of Bb. You can play loads of music you couldn’t play before. Using the capo should not be a substitute for learning more challenging chords. Even though you can play music with a capo that you couldn’t play before, still keep progressing and learning new chords.

There are many types of capos. The D’Addario/Planet Waves capos are excellent. The Artist Pro, and the NS Capo Pro are wonderful capos. When purchasing a capo, make sure to get one that is right for your guitar. There are capos for steel-string guitars and capos for classical (nylon-string) guitars. The steel-string capos have an arched pad that covers the strings, and the classical capo has a flat pad and the pad it often a bit longer.

When using the capo, make sure to place it next to the upper fret wire and make sure it presses on the strings tight enough so they don’t buzz when they are played open.

So…pick up capo and have fun playing everything that you couldn’t play (or sing) before.

For more…see this related video blog. 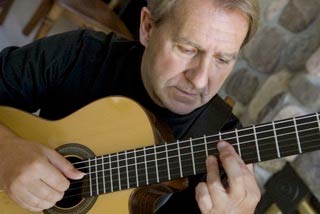