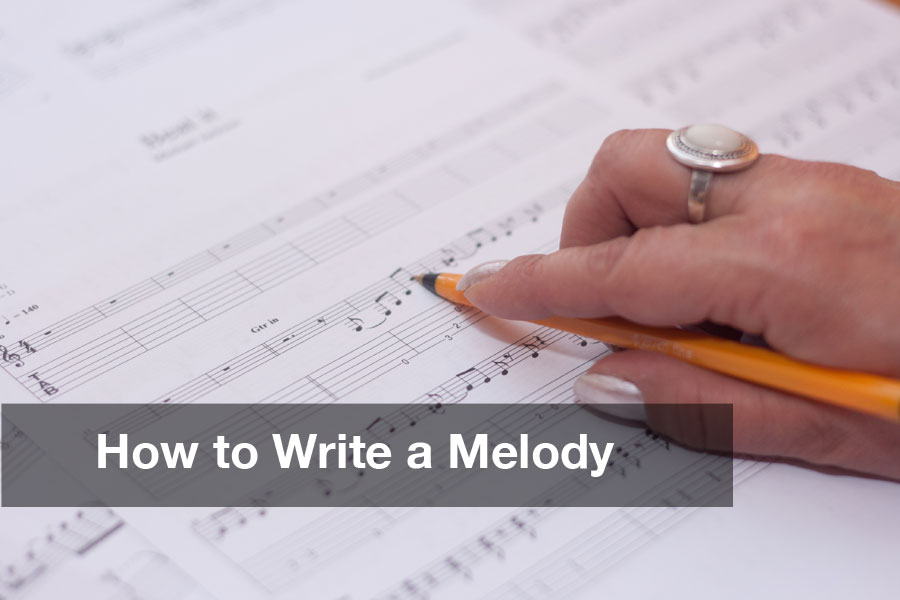 Many Approaches to Teaching Students How to Write a Melody

There are probably dozens of approaches and techniques for writing a melody. These methods range from starting with chord tones, to having the melody drop out of heaven and land on your ears. Many, if not all, of these approaches work, and some are better than others. The technique I would like to focus on works well with young students and offers a step-by-step approach to early endeavors in composition.

Starting with a Chord Progression

To begin with, have the students write a good chord progression. I have discussed writing chord progressions in earlier bogs. By a “good” progression, I don’t necessarily mean one that contains a lot of chords, but rather, a progression that exhibits form. To do this, the chord progression should have a cadence ( V to I, IV to I, V to vi, I to V, or I to IV) every 4,or 8, measures. These cadences can appear in major or minor keys. This is also a good time in the composition process to discuss form. Have students write an A section 8 measures long, and then repeat it. Next have them write a B section that could be 8, 12, or 16 measures long. Then, have them play the A section again. They have just created one of the most popular music forms of all time – AABA. The following example shows this form:

The Role of Lyrics

The important role played by the lyrics in the song cannot be overstated. They will dictate the mood, the rhythms, and overall feel of the music. Many songwriters start composing with the lyrics. Others start with the chord progression, and others begin with the melody. Most songwriters have used all of those techniques at one time or another. For our purposes, let’s say we have the lyrics. Next, see if the mood of the song is happy, sad, uplifting, reflective, mad, or whatever. Then, have the students write chords that reflect that mood. For example, happy songs could be in major keys. Sad songs could be in minor keys, etc. I should mention here that I believe the best way to have students learn to write lyrics is by having them write blues lyrics. They only have to rhyme one word. The form is basic. Sing a four-measure phrase. Sing that phrase again, and then rhyme it in another four-measure phrase.

In the AABA form, each section could be eight measures long and the first four measures could rhyme with the next four measures. This might seem a bit sterile, but it works and has been the formula for many hit songs.

The lyrics can also dictate the rhythm of the melody. Have students write sentences and then see where the accents fall in the words. For example, in the word “tomorrow,” the accent of the word comes on “mor.” The accented words should be placed on down beats or accented beats. The word “tomorrow” might be placed so that “to” is a pickup beat and “mor” lands on the first beat of the measure. Students could write the rhythms of their words before writing the pitches for the melody, as shown in the next example.

One Note Per Measure

To begin writing the pitches of the melody, start by writing one note per measure. The note should be a chord tone. The following example illustrates this:

When writing the chord tones, have students keep the different notes in the chords close to one another. This will keep the piece melodic and easier to sing.

If your students are writing the melodies using the guitar, it may be good to tell them that the notes on the guitar sound one octave lower than they are written. Otherwise, the melodies may seem too high to be sung.

After the one-note-per-measure melody has been written, have the students write an interesting, but not complicated, rhythm using that one note. Tell the students that repeating the rhythm is common and desired. As many of you know, these are rhythmic motives and provide continuity to the music. The lyrics, if you are writing a song rather than an instrumental piece, might determine the rhythm used.

Here is an example showing that technique:

Next, to come up with a melody that goes beyond one note per measure, connect the chord tones with notes from the scale of the key of the piece. In the next example, the song is in the key of G and the chord tones have been connected with a G major scale:

The next example shows the song A New Day showing the culmination of all the steps that were presented earlier. A great tool to introduce students to writing melodies is to have them write a new melody to a familiar song. Keep the rhythms and lyrics the same, but change the pitches of the melody. Writing chords tones on the important beats (especially beat one of the measure) is an important consideration. The next example shows the tune Silent Night written with a new melody. Who knows…on a different day maybe Franz Gruber would have written it this way:

These steps to building a melody may seem oversimplified. That’s fine. That’s what you want. The students have the rest of their lives to enjoy the journey of composition and learn new techniques. For now, it’s most important that they jump in the water and have fun.