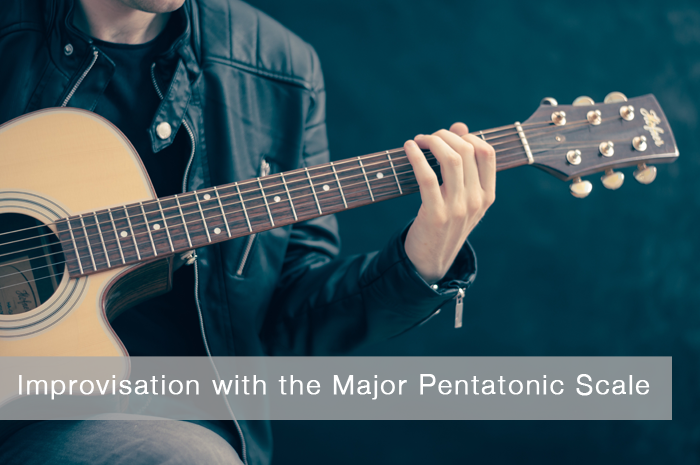 One of the first scales many guitar students learn is the minor pentatonic scale.  It is popular because it can be used to improvise over the blues and sounds great against minor and 7th chords.

One of the beautiful things about the major pentatonic scale is that it sounds great when it is used to improvise over any chord in the major key.  For example, the notes in the G major pentatonic scale will sound good played over a G, Am, Bm, C, D, or Em.   At first, have your students record themselves playing a chord progression comprised of any of the chords in the key of G, or have another student play the chord progression (they can play as many measures of each chord as they would like).  While the chords are being played, a student could improvise a solo by mixing the notes up from the G major pentatonic scale.  To learn to “mix up the notes” of the scale, it’s a good idea to use the notes from the scale that are in a small area (such as using the notes in the scale that are on the fourth and third strings).

To begin learning to improvise using the major pentatonic scale, the student doing the improvisation can simply play the notes of the scale from low to high and then reverse the direction.  On a more advanced level, the improvisation will sound even better if the first note of the measure is a chord tone.  After the students have played the scale over a chord progression using chords in a given key, have them practice improvising over the chords to a popular song in a major key.  As long as the chords stay in the key, any note in the major pentatonic scale can be played over any chord in the major key.

Here are two eight-measure solos your students can learn using the scale over chords in the key of G.  Use the diagram above of the major pentatonic scale with the root on the sixth string. Learning these solos will help provide a springboard for your students to build their own solos.  The diagram and solo Goin’ To Nashville are taken from the Consonus Course and Book, Guitar Fundamentals, Intermediate Guitar Level 2.