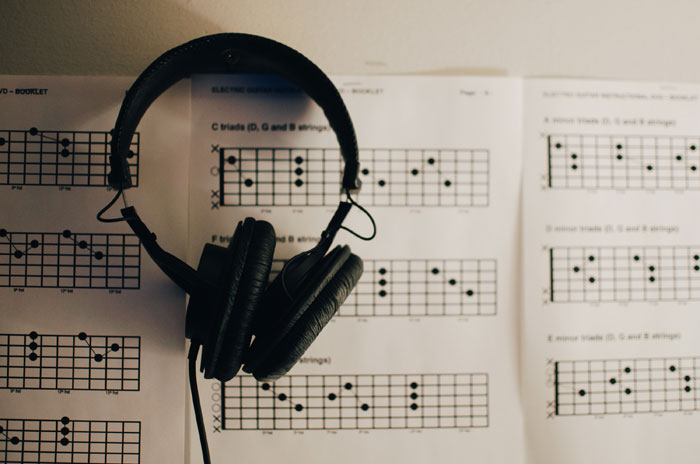 I have my students compose from very earlier on in their instruction. Teachers should have their students begin composing by writing chord progressions. The first chords students should be learning are in the key of G. So, if the students know only a G, C, Em, and D7, they could be assigned to write a chord progression using those chords. The students should show how many times to strum the chord and the order of the chords. They don’t have to know which chords usually follow which chords.

After writing chord progressions using the chords they know, the students can use more chords and show how many measures the chords get and what strum patterns to use in the measures.

Not too long into the student’s instruction, the students can be shown how to find which chords go together in a key by using the modified circle of fifths (the chord clock) that is in the Consonus method. Then, have them write cord progressions in various keys.

What Order To Put The Chords

After they are familiar with knowing how to find the chords in a key, have them put the chords in a key in alphabetical order and assign them Roman numerals, beginning with the chord that has the letter name of the key. Use uppercase Roman numerals for the major chords and lowercase Roman numerals for the minor chords. You can then explain to them the order that chords usually progress. For example, the ii chord often goes to the V chord, and the V chord often goes to the I chord. This sequence shows the common progression of chords: iii-vi-ii(IV)-V-I

Now that the students know how chords “progress,” show them how to embellish chords. Keep the embellishments basic. For example, adding 7 to the V chord (D7 in the key of G) and m7 to the iii, vi, and ii chords, or adding maj7 or add9 to the I or IV chords. Students will be fascinated by how adding simple embellishments to chords adds color to the music.

One technique that works in teaching students how to write melodies is using chord tones (beginning with one chord tone per measure) and connecting the chord tones with notes from the scale of the key of the piece. Also, after writing a chord progression, many of the students will be able to make up a simple melody by singing a melodic line by ear with the chords.

Don’t complicate things by trying to give too much information at one time. This approach to improvisation only skims the surface of the material to be learned that deals with composition. But, it’s a user-friendly start to what can be a rewarding experience.